What is Context Retention?

Context is linguistically defined as the background in which the conversation is taking place. In the bot perspective, it can involve retaining the memory of any piece of information that has been either explicitly given by the user, or derived from past user behavior, or any action performed by the IVA.

It can involve information like steps traversed by the IVA in the conversation, entity values collected, ML (Machine Learning) Module which sent the last reply e.g. Disambiguation, Small Talk, etc.

User’s own name, email, phone number, etc. explicitly provided by him, will also form a part of the context. The context needs to be stored before it can be used. Before we understand when the context is used, it’s important to know when it’s deleted.

When is the context information deleted?

When is the context used? If the context has not been deleted as per the above 2 cases, the IVA can use the context within 24 hours, from the time the conversation was initiated by the user.

Illustration - Let’s say there is a conversation that ideally can get 4 levels deep as shown in the image below. It has a START step, a CHILD step, a Grand-Child step, and a Great Grand-child step with the Great Grand Child step being the Context Clear step. 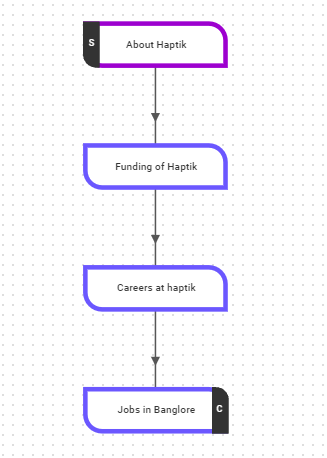 So if a user comes back within 24 hours, say e.g. 12 hours, and taps a button or a Quick Reply on the FUNDING OF HAPTIK step, he can reach the Grand-Child step i.e. CAREERS AT HAPTIK Step directly.

Context retention works on a bot at all times, and it is not necessary to have connections between Steps in order for Context Retention to work. Context retention will also try to understand the context of a statement by replacing similar words. It does this and then takes that as a User Message and accordingly it detects the appropriate Step.